Tornelo runs what we call an "Individual Swiss Teams Tournament". This event format is ideal for schools and youth events because it:

All players take part in an individual Swiss event but with a pairing rule that prohibits players from the same TEAM playing against one another. The algorithm is weighted rather than absolute to allow pairings even if no options are possible where all players play against non-team mates. Generally you will find that only players on a score of 0 points will be paired against team-mates.

Setting up a Teams Tournament

Click Run an Event and enter all the details of your event.

Check the box Use Teams and the event will be setup as a Teams Tournament. This can be toggled on and off at any time during an event.

What is a Team?

Teams are automatically formed by having players represent the same GROUP. A Group may be a school, a club, a league team etc

Players select the Group which they represent during entry into a Teams Tournament.

Event Organisers may change the Group that any player Represents from the Player Entry Details card at any time. 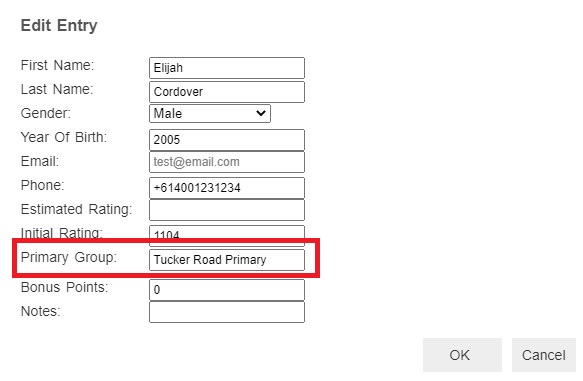 You can split Representatives of a Group into smaller teams if required. These team names can be given any name you like (A, B, C etc or Blue, Green, Red etc). A Team is a subset of a Group - it is possible to have 3 teams, from different Groups all called "Blue".

A player without a Group cannot be in a Team.

There is no difference in the way you manage a Team Event or an Individual Event.

The results are automatically calculated and displayed on the Standings.

Team Standings are ranked first by the TEAM SCORE 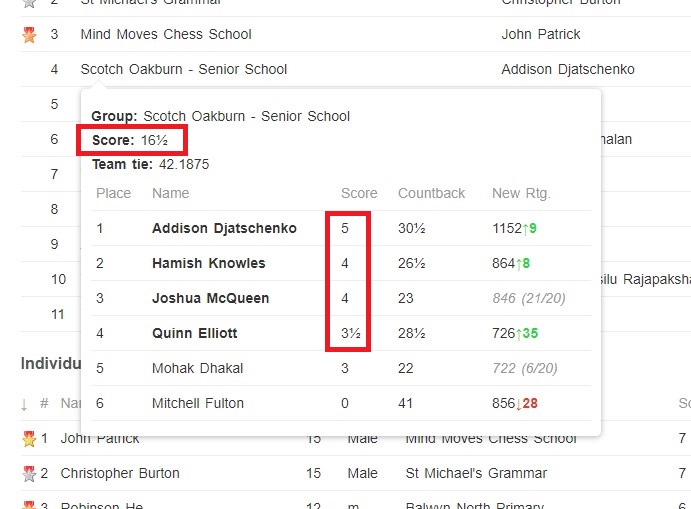 The scores of players after the Top 4 are discarded.

The Tiebreak is a logarithmic system which gives weight to players closer to the top. Effectively if Team Scores are tied based on the Top 4 players, it will compare the Top 5 players to break the tie. If the 5th ranked players on each team have the same individual scores then it will compare the 6th best player, and so on down until the tie is broken.

This provides a small advantage to the larger team. If two teams have exactly the same performance, the larger team will always win, assuming that their additional player scores at least 0.5 points.

If teams are tied all the way and have the same number of players then we calculate based on Individual player Bucholz (sum of opponent's scores) in the same way; first the Top 4 players, then Top 5 etc.