Is this something to worry about?

Do you see this icon on the game?

Or this icon on the pairings?

This indicator shows that the Player has 2 connections to Tornleo. The log files will record the IP Addresses.

Why does this happen?

A websocket connection is formed between the player's browser (client) and Tornelo (server). If the client isn't sure that the connection is still active then it will try to create a new connection. When the first connection hasn't yet closed and the second connection opens this now shows as 2 connections.

It can also happen that the client's wifi is jumping between different hotspots, trying to find the strongest connection.

The two major on-demand chess platforms differ in their opinion. One prevents a user from creating multiple connections, the other allows it to happen.

We prefer to allow multiple connections because it creates a smoother experience for the player.

Can players use this to cheat?

It is possible for 2 different people to login from different devices with the same email address and password, then join the same game. In this way a second person could be making moves for the original player.

We don't feel there should be any concerns about this possibility.

1. We have never seen anyone use this method of cheating. There are many easier ways for the player to cheat, which are much harder to catch.

2. 99% of the time the log files will show multiple connections from the same IP address, with a rapid disconnect and return to normal. It's quite clear the client is simply trying to maintain a stable websocket connection. If we prevented this, instead of the 2 icon, you'd have the player lagging or being disconnected.

3. Any time there are multiple connections it is displayed to the opponent, the arbtier and the player - making it clear that there is a potential issue

4. If players' screens are being supervised then it will be obvious that pieces are moving 'on their own' and the log file will record the multiple IP addresses to prove the behaviour.

5. If screens are unsupervised then the second player could be playing anyway and the original player's screen won't be connected but nobody will know.

Preventing multiple simultaneous connections doesn't seem to offer any advantage for Fair Play, but does give a stability of connection disadvantage. When disadvantages outweigh advantages this is not a feature we want! 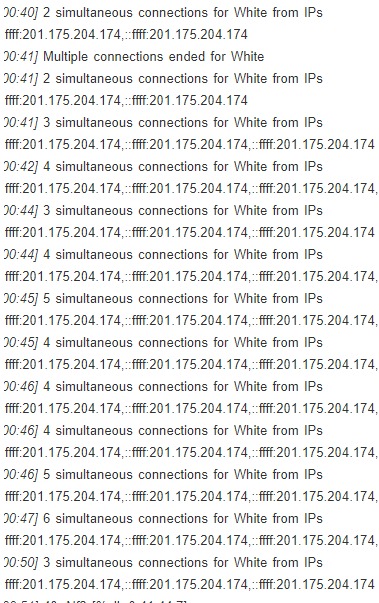