For importing pairings and games

Tournament arbiters import PGN files for one of two reasons:

Tornelo can manage to accommodate some minor imperfections in the names, but generally having an exact match is preferred.

Many desktop pairing programs can export a PGN Headers file, essentially a blank PGN file with just the names of players, but no moves or results. You can import such a file into Tornelo to create pairings. 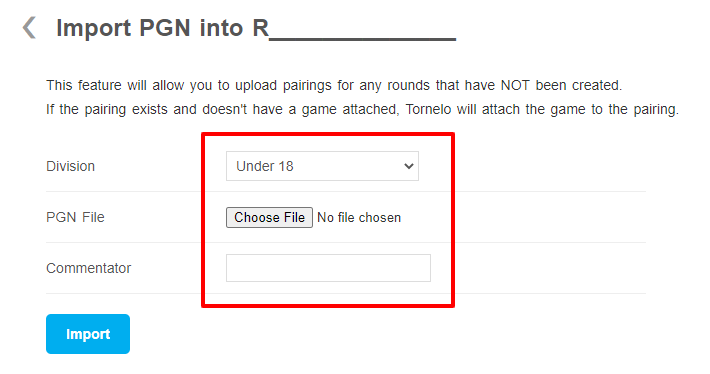 Tornelo stores chess games with comments, the commentator field provides an 'author' for any comments which are included in the game.

You can see in this example that no games matched existing pairings, so no games were imported.

Two new pairings were found and created. The PGN game headers provide round numbers, board numbers and player names.

The round can now be played online using Tornelo's online game server.

A PGN File stores the board numbers for Team Events as [Round “1.1.1”]

And will import PGN headers to create pairings and display board numbers accordingly.

One trick used to add line-breaks in a Teams event (visual display only) is to import an extra board which won't be used for the event. For example 1.1.5 - this will insert the result with BYE v. BYE and act as a visual break on the page, making it even easier to see which teams are playing against one another.

Some organisers prefer to manually enter the pairings.

In this case you can import a PGN file with no names and it will create a 'skeleton' pairing with all the match/table numbers in place. You can then simply edit each pairing.

9 out of 10 liked this article